I don’t exactly remember when I bought this book for my mum. It was in one of those #sweetannoying short trips London-Barcelona that I have seemed to MASTER.

Recently, in the context of the Catalan Referendum, I read an article on a Catalan newspaper where the book written by George Orwell was mentioned. It rang a bell. That’s how I remembered I bought it more than a year ago… and not read it.

I wasn’t really sure what it was about. It was a surprise to find out that it is an actual diary of the author’s experience in the Spanish Civil War (1936-1939). He joined the militia and fought on the front line along Spaniards and people with other nationalities. Above all, British gentlemen.

I have to say  I personally thought the description of daily life was quite boring. Although, thinking about it now, I didn’t find it that dense.

At the end, two appendixes briefly explain the political movements (parties, divisions, pro, cons, reasons, consequences… ) implied in the war. Very interesting and less clear. Not the author’s fault, though. Explaining a war is not an easy job. 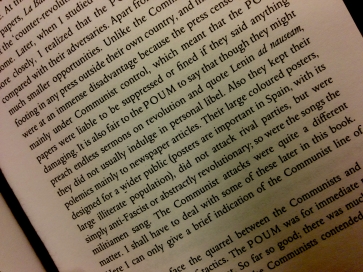 But it is a pleasant and funny moment when one comes across descriptions of the locals. I found myself  proud of where I come from or a similar weird feeling. 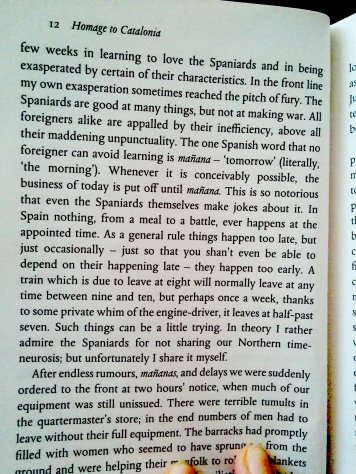 Stranger eyes narrated my history, described my homeland, praised my culture and values.

That was, after all, a Homenage to Catalonia by George Orwell.

2 thoughts on “Homenage to Catalonia”

From #Girona, studied #Medicine in #Barcelona and lived in the #UK, where all her life turned upside down. Critical but not destroyer, wants to be a #knowitall. Currently working on it :)